Much of the four Pontiac M-39 20 mm guns is hidden internally -- only the front few inches stick out of the back of the gun blast panels. Making those few inches turned out to be a challenge.

To make a realistic-looking gun, I needed a good set close-up photos. Unfortunately, none of the F-100 restorations I had seen at various museums had the guns installed, so my photo collection did not have a single M-39 picture in it. Even the beautifully restored F-100D at the AZ ANG base in Tucson lacked guns. (Thanks to Al "Smitty" Smith, I was able to take dozens of close-up photos of that aircraft. You can see some of those pictures by doing a database search for aircraft number 56-3055. You can check out Smitty's many story and photo contributions by searching the database.)

After weeks of unsuccessful web searching and many email requests, Pete Felts came to the rescue. When Pete made a trip to Tucson, he managed to get close to an F-100F at the AMARC base ... and he remembered my search for gun pictures. Bingo ... that aircraft did have the guns installed. (Pete Felts is a super source of all sorts of F-100 information. He knows that aircraft inside-out ... check out his story and photo contributions by searching the database.)

Figure 1, cell 1 shows the close-up that became the main source of the gun model. The gun manual supplied the basic measurements to augment the picture.
Cell 2 shows the basic "ingredients" for the gun model ... bless PVC pipe, which comes in a wide variety of inside diameters and wall thicknesses. The white plastic sheet is styrene plastic that you can find in any well-stocked hobby store. Incidentally, the wide PVC rings will become the Muzzle Gas Deflectors. (As usual, Pete Felts provided the perfect explanation of what the MGDs do: "Muzzle Gas Deflectors keep the gun gas from being forced into the gun chamber when the gun is fired in flight. If the gas builds up in the gun compartment, it can blow the door off and that ain't good."
Cell 3 shows the first rough assembly ... I used lots of PVC starter (the purple stuff) and PVC glue (the blue stuff) to make strong bonds and to help seal the edges. This part was completed on 18 April, 2007.

After the initial assembly was completed, the barrel pieces were sanded. Figure 2, cell 1 shows how it's done ... a good lawn chair works well, especially after a 7-week layoff due to three surgeries on my left eye. Not a bad way to spend some recovery time ... good weather, nice surroundings, and lots of bird and insect songs. Tough job, eh?
Cell 2 shows the four guns. At this point, the pieces have not yet been cut to the proper lenghts, but the black lines you see show that I have already marked them for cutting.
Cell 3 shows the work that had to be done on the Muzzle Gas Deflectors. Although the outside dimensions were perfect, the PVC connectors were too thick to match the required 0.085-inch thickness ... and that meant shaving the inside down. That work would have been really difficult if Steve Rettell had not stepped in. (Steve's well-equipped shop, his wide-ranging expertise, and his fine teaching skills are the basis for most of the F-100 "modeling" work. You can see him at work by checking out the front end fuselage link.) This picture shows the PVC piece in Steve's lathe.

Figure 3, cell 1 shows me using Steve's lathe to do the precision cuts that will produce the final length dimension. (Steve Rettell took the picture while he made sure that his careful supervision kept me out of trouble.)
Cell 2 shows the basic shape of completed guns. The lengths, inside and outside diameters, and thicknesses are correct at this point.
Cell 3 shows the pieces after the bright silver paint was sprayed on. The advantage of using such bright paint is that the smallest flaws show up ... this picture shows that more smoothing and sanding is needed. The final "gun metal" paint will be applied before the guns will be installed.
Cell 4 shows the gun barrel assembly. Creating the rifling inside the barrel was one of the jobs that required real patience. Steve created a reaming tool to do the initial scoring for the rifling ... and then it became a matter of simply spending hours with a small jewelry file to get the rifling clean. Some paint helped create the "used" look. This assembly still needs a little touch-up work, especially on the inside of the Muzzle Gas Deflector. The rifling needs a little clean-up, too. These finishing touches will be completed before the guns are installed in the gun blast panels. (I just wanted to give to a preview!)
Cell 5 will show the installed guns. The (fiberglass) gun blast panels are done at this point and they look like the real (titanium) deal.
Cell 6 is for those of you who might want to duplicate these guns for your own project ... it would be great if this project would cause more than a few people to build their own full-scale F-100 "models" ... The picture shows a screen shot of the PowerPoint "gun construction drawing" slide that I used to make the guns. The panel in the upper right-hand corner shows the completed gun assembly. 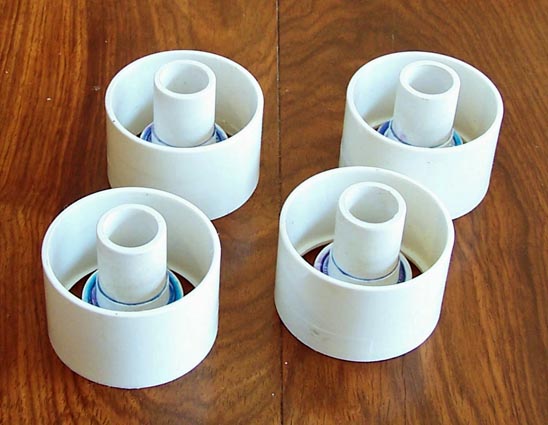 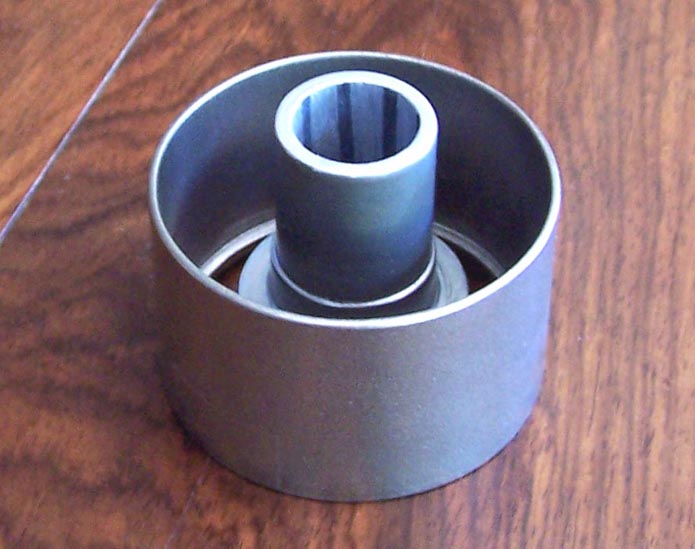 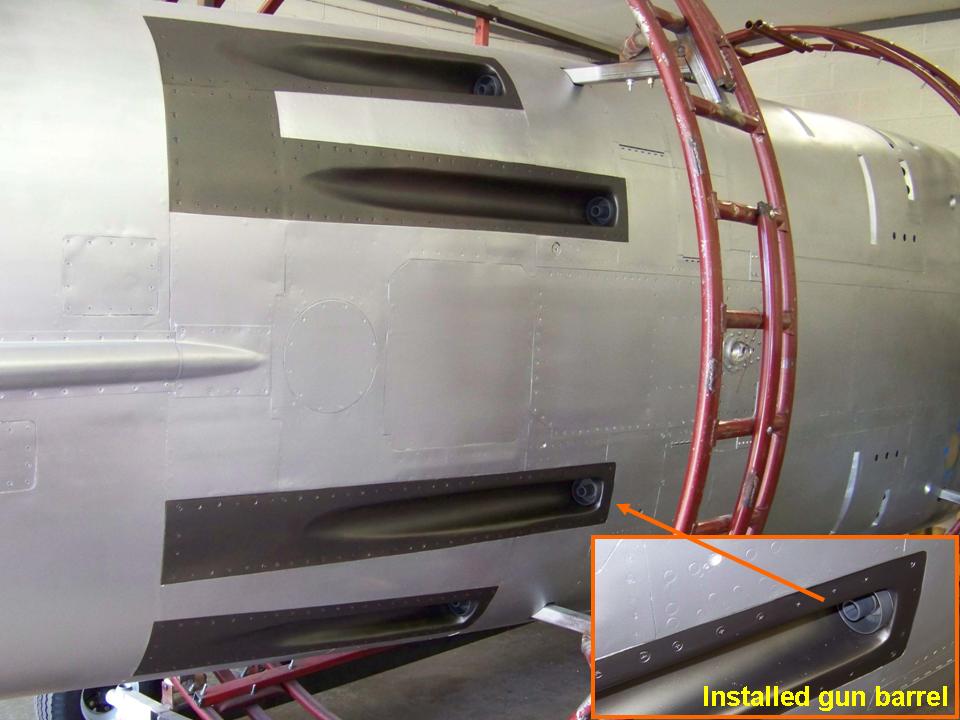 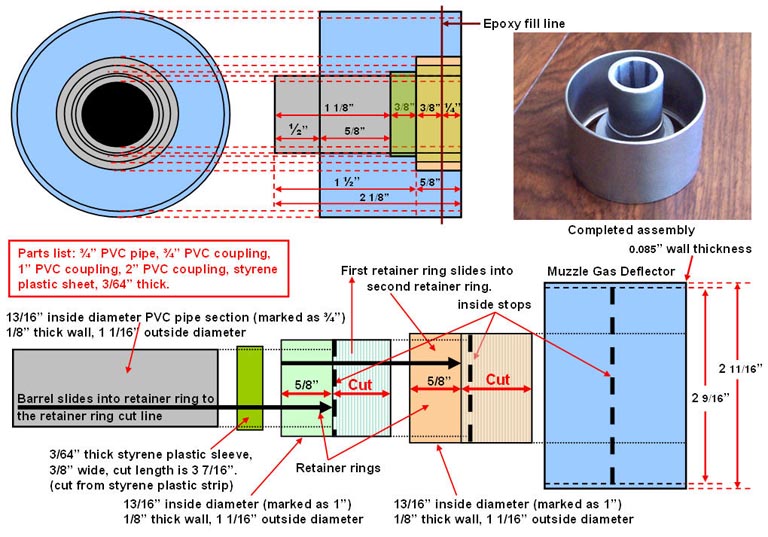 Special note: Some years ago, I lost an opportunity to buy an F-100 cockpit procedures trainer. Although the cockpit in this trainer is not functional, it looks real enough ... and, most important, it includes the windscreen and the canopy. Having this piece of equipment will save at least a year of construction time. If you can help me find such a trainer, please contact me.

I need a set of F-100D fuselage blueprints to ensure that the formers and skin plates we cut are accurate. If you can give me some "heads-up" about where to buy such blueprints, I would sure like to hear from you!