I need Your Help!

If you ever served with a unit that used the F-100 Super Sabre, you probably have information that will be very useful in developing a detailed history of the F-100. Whether you flew the F-100, worked on it as a mechanic or weapons specialist, or served as a squadron information officer, chances are that you can make a valuable contribution to this project.

Please provide as much detail as possible: Where was the photo taken? By whom? When? What wing and squadron? What mission? Who are the people in the photo? What was the aircraft serial number? (If you don't know the serial number, a tail number or a buzz number will let me trace the serial number.)

(Don't worry about not having all of the details -- any information is always better than no information!)

To illustrate what I have in mind, please check the following photos and stories. 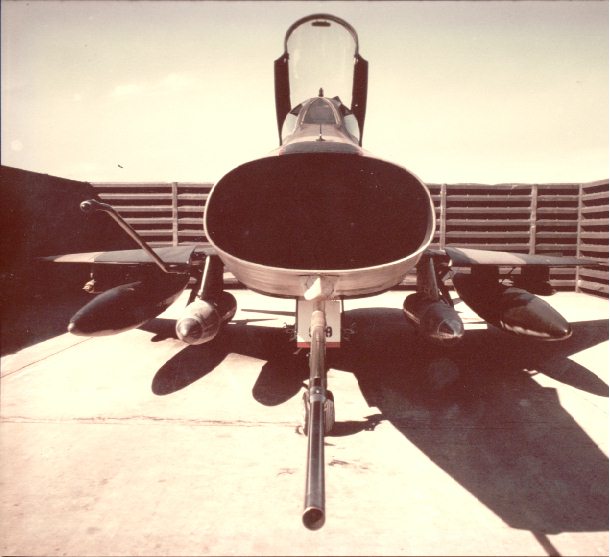 Some time after this was taken the aircraft developed a wing crack in the lower surface wing skin. An engineer assessed the problem and we took the inboard pylons off and fabricated a 0.5-inch X 6-inch band of steel that was attached from one pylon fitting across under the fuselage to the other inboard pylon. This was to provide enough residual strength to fly it that way. I ferried the airplane from Vietnam to the Philippines and on to Taiwan in that configuration. The IRAN (Inspect and Replace as Necessary) facility replaced the entire wing and 989 went back into combat with the 35th Wing, Phan Rang, RVN. 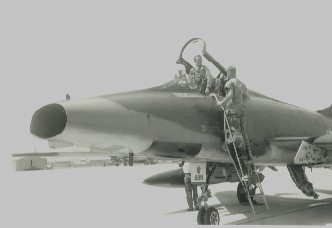 This photo of me in front of 56-3073 was taken sometime in 1967-68 at Phan Rang, South Vietnam. The cockpit frame has the name of Capt. Garrett on it -- we flew whatever plane was assigned to us, so the cockpit frame name and the pilot flying the airplane didn't necessarily match. 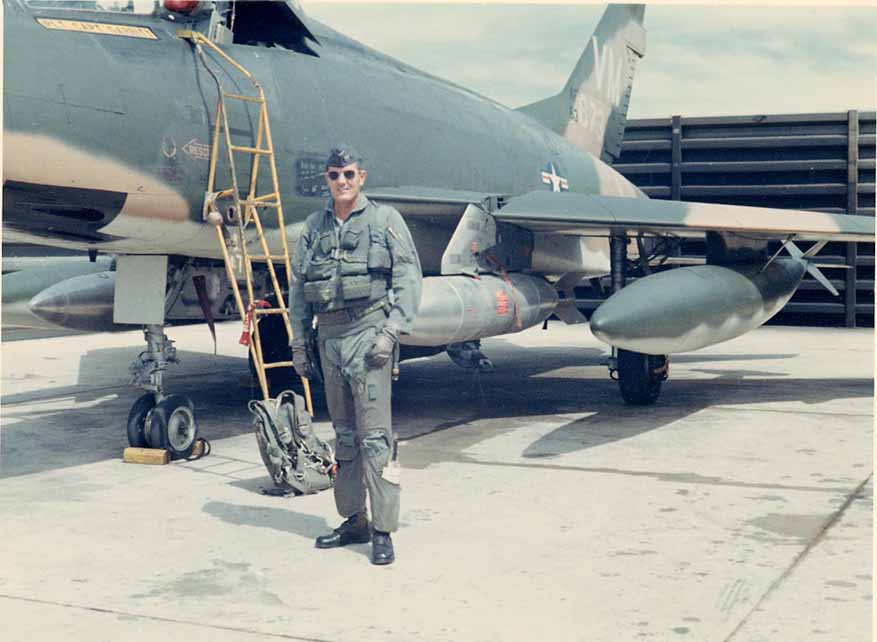 Almost all my combat missions were flown in South Vietnam. But I do remember one mission somewhere into Laos -- I don't really know where, because we scrambled from an alert to hit a target marked by a FAC (Forward Air Controller). Our FAC was an O-2. When we got to the target area, we were holding at 10,000 feet, looking for the O-2, who was also holding at that altitude to keep away from intense ground fire. (We didn't know that at the time!) Anyway, we finally spotted the O-2 when we just about ran over him.

When the FAC marked the target, our flight of two rolled in to hit the target with hi-drags-- only to encounter the most intense ground fire you can imagine. I hadn't seen that much fire since Korea. But we dropped our load without getting hit -- I still don't see how that was possible.

Incidentally, each one of our four squadrons always had two aircraft on alert. Although an alert assignment was't much fun, it did allow us to scramble quickly and fly missions that required our immediate presence. 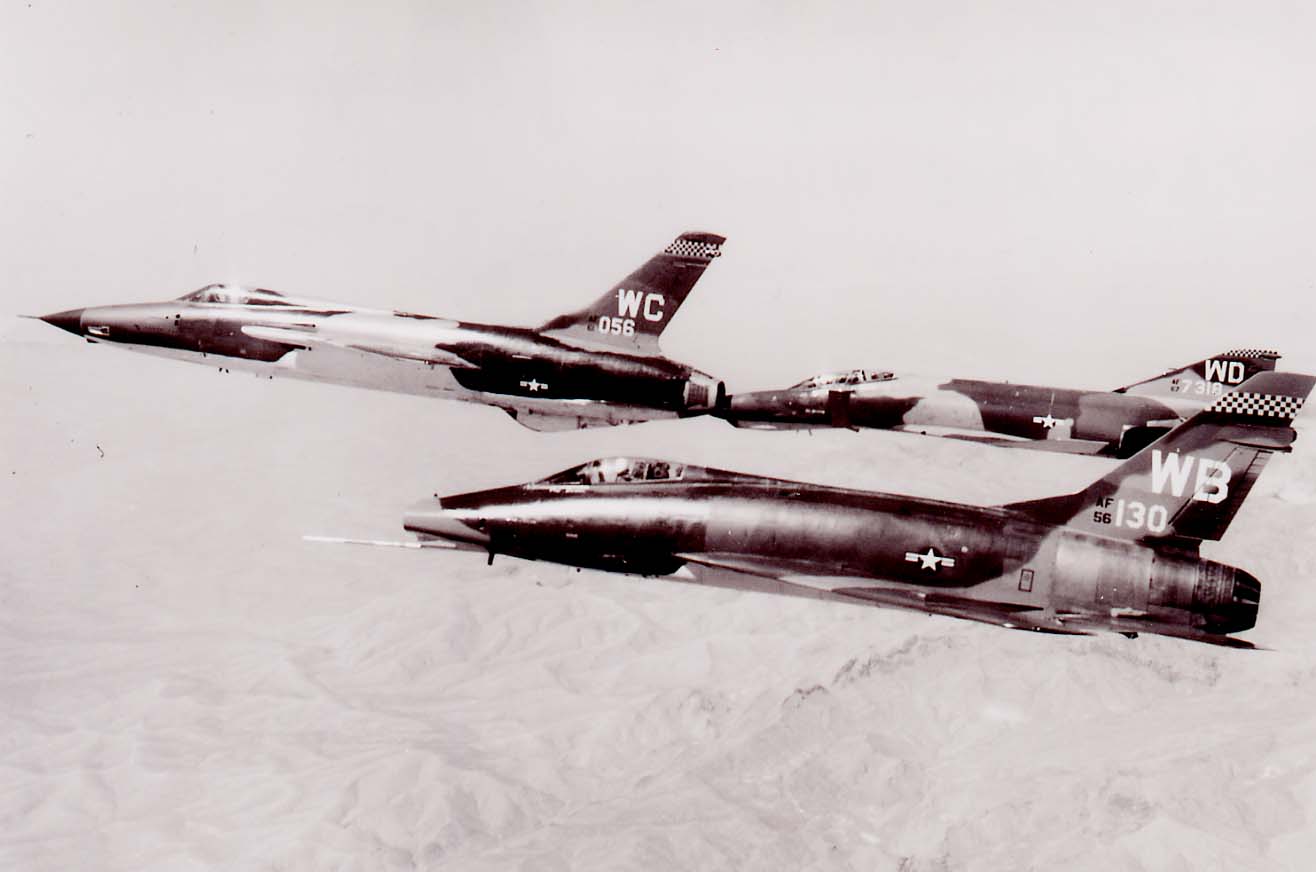 The F-105 was flown by Dale Leathem. The F-4E was flown by me. The F-100D was flown by Don Bartle. Don, Dale, and I were close during our six years at Nellis. I also flew with the Navy for two years. I flew the A-4 Skyhawk off the USS Bon Homme Richard aircraft carrier. During this assignment I dropped some of the first bombs on Vietnam. I retired in 1976 with the rank of Colonel at Nellis Air Force Base. 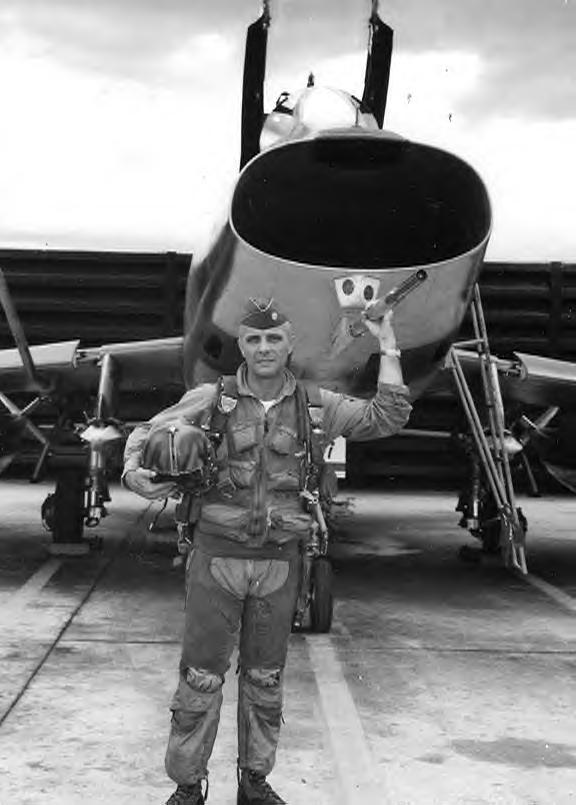 Major Roussell’s story: During 1970 I flew with the 31st Tactical Fighter Wing, 416th Tactical Fighter Squadron, based at Tuy Hoa AB, Vietnam. (I was the operations officer of the 416th.) I was transferred to Phan Rang and became the Operations Officer of the 615th Squadron there. When the Commander finished his tour, I became the Commander. That was all done in 1970. I would have stayed at Tuy Hoa the entire time except that the powers that be decided to donate our nice clean little base (Tuy Hoa) to the VNAF (Viet Namese Air Force.)

This picture was taken at Phan Rang after one of the 309 total combat missions that I flew in 1970, combining the assignments at Tuy Hoa and Phan Rang. During those two assignments, I was awarded one Distinguished Flying Cross (DFC) and the Air Medal with 12 Oak Leaf clusters. I earned the DFC after being declared “top gun” on the Ho Chi Minh Trail, where I attacked a road (actually, an elaborate trail system) that was being repaired by a large group of North Vietnamese road crewmembers. The road had been destroyed the night before by B-52s. (Note: This mission was flown out of Tuy Hoa. The picture was taken later, after Major Roussell’s assignment to Phan Rang. It was used in a story published by the Stars and Stripes paper of the Far East.)

Comment by Dick Roussell: Wish I could find the Stars and Stripes paper of the Far East to give you the exact information about this mission, but I have no idea as to how this can be retrieved. 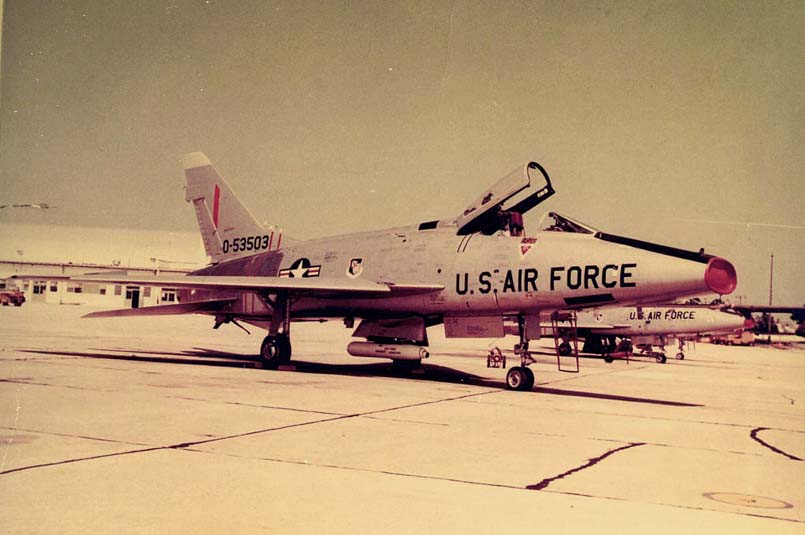 This F-100D was modified for Project Pave Arrow at Eglin AFB, Florida. The unit charged with evaluating this device had ten F-100Ds and four O-2s. Dick Roussell was the unit's commander.

The pod was a laser seeker with vertical display to the pilot on a Ferranti gunsight. (This configuration required a lot of modifications to the aircraft.) The O-2 carried a laser target designator in the back seat. (The company provided two O-2s for testing -- one from Martin Marietta and the other from the Autonetics division of North American.)

We had a lot of trouble with this system. The lasers could not maintain power because of corrosion on the mirrors -- which were water-cooled. (It was impossible to keep out water impurities.) This system was the brainstorm of Gen. Andy Evans in the Pentagon to satisfy a SEAOR (Southeast Asia Operational Request) from Gen. Brown, who was the 7th Air Force Commander in Vietnam.)

The following photo was contributed by Dick Roussell. Date, place, and pilot are unknown. Even if your photo contribution has limited information to accompany it, that photo will still be very useful. A good photo may attract potential story contributors who can supply the missing information. 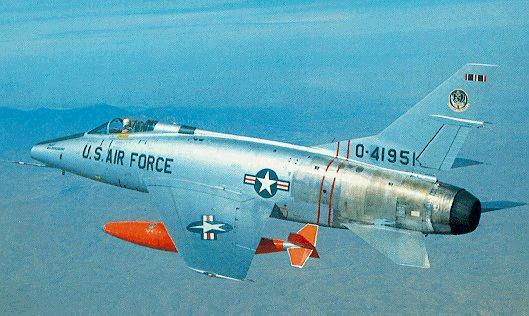 Location unknown. Date unknown. Pilot unknown. Mission profile unknown. If you have any information about this photo, please contact

As you can tell by the following information supplied through the courtesy of Herb Arnberger, Dave Menard, Dave Colbert, and David Deaver, the appeal for additional information about the previous photo was successful. If you see pictures in the database that have little or no information about them, please follow their lead.

Note: The following information was provided through the courtesy of Herb Arnberger.

Note: The following information was provided through the courtesy of Dave Menard, who is often referred to as "Mr. F-100."

That is a picture of a 4758th Defense Systems Evaluation Sqdn a/c, out of Biggs, then Holloman AFB. It towed targets for the Army AAA batteries, and did other things for ADC. They had an ADC insignia on the right upper fin. I saw a few of these transient at England AFB LA in 1964-65 with those day-glo orange drop tanks. Unfortunately, I was not allowed to take any photos of them in those paranoid days.

Note: The following information was provided through the courtesy of Dave Colbert.

This aircraft, 54-1951, was assigned to the 4758th DSES (Defense Systems Evaluation Squadron) of the ADC (Air Defense Command) stationed at Biggs AFB, Texas.

It is difficult to tell from the online photo, but I believe the pilot was my grandfather, Wayne J. Rosenberry, Lt. Col. (Ret.) USAF, and that it was taken while he was stationed at Holloman AFB, New Mexico, in the late 60's to 1970. I'm familiar with it because I believe it was also used on the back cover of an Airman Magazine issue (someone actually gave him a copy at one time), which is where I first saw it. It was there that you could actually make out his name on the nose of the aircraft. (He was a Major at the time of the photo).

If you would like to share F-100 memorabilia such as photos, personal stories, articles, books, wing and squadron patches, or any other F-100 information, please contact me by e-mail or by writing me at my "snail mail" address. You can also contact me to request additional information, to make suggestions, or to provide additional leads.

If you use e-mail, please write F-100 Project in the subject line to make sure that I do not accidentally delete your very important message. (Like you, I get a lot of spam, so I tend to use use my "delete" key often.)

All of your contributions will be gratefully acknowledged. For example, note the credit line shown in the preceding photos and stories.

The photos and stories you contribute will be entered into my database and will be available on the web when the project is completed. At this point, I have all 2,294 serial numbers, but now I need to fill in the complete service record for each of those aircraft. In short, this will be a multi-year project! But with your help, I'll wind up with a truly spectacular F-100 history.

To give you an idea of my database work thus far, please click on the

Please feel free to distribute this material to others who might be willing to help out.

Many thanks for your help!