To help preserve the F-100 Super Sabre's legacy, photos are always an important feature. However, accurately built scale models provide that all-important "hands-on" 3-D view of the Hun. To produce such models, all you need is a good basic kit, good documentation, some patience, some time, and a steady hand. If you are really serious about doing detail work, there are some fine aftermarket detail kits on the market. Figure 1 shows a few of the kits and tools you can use. 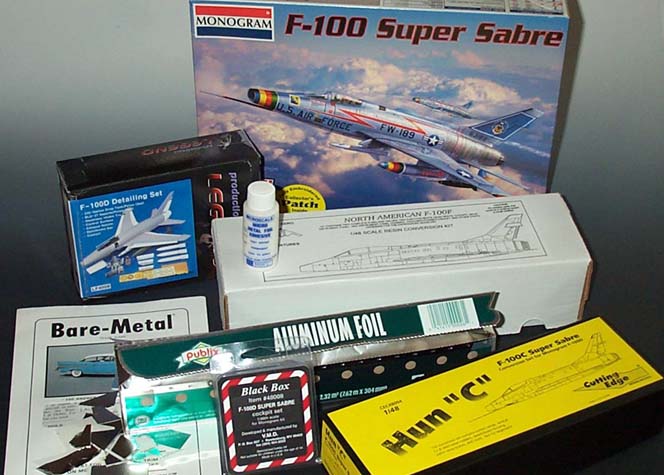 Figure 2 shows what just over 55 hours and a lot of patience -- and a good airbrush -- can do. Getting the burner can colors to match a photo composite took a bit of practice, but the results are worth the effort. 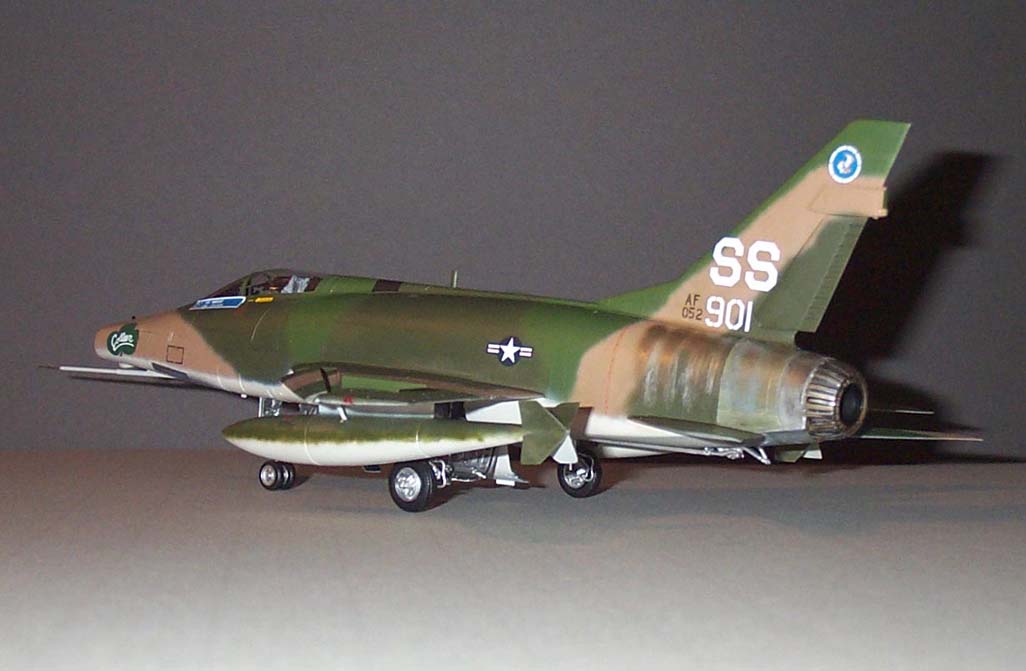 Additional information supplied by Lee Howard:
There is an entry about Jerry in Davies' book, North American F-100 Super Sabre, on page 101. After flying the F-100 in Vietnam, I flew the A-7 with Jerry at DM Davis Monthan. Unfortunately, I did not know him when he was a Hun driver, nor do I know where Jerry came from before he got to DM to fly the A-7. In any case, our A-7 class at DM was fun. The instructors at DM were all Hun IPs from Luke who had checked us out before SEA, so we knew most of them. Our instructors at DM only had about eight hours in the A-7 when we started class, so it was a case of the blind leading the blind. Since the A-7s were all single seat, our initial learning curve was pretty steep. Fortunately, compared to the Hun, the A-7 was easy to fly, so there were no major problems.

Additional information supplied by Cecil Myers:
Actually, the first A-7D class was at Luke AFB. I was a member of that first class and all of the members of the class were former F-100 and F-105 drivers. The instructors at Luke were all very experienced in the A-7 because they had participated in the test program prior to becoming IPs in the transition squadron. The A-7 was the easiest airplane to fly that I ever put my hands on, especially after flying the HUN, which was a hand-full under the best of circumstances and a real bear when the sh*t hit the fan.

Figure 4 shows a 1/48 scale model of the F-100C as flown by Col. Laven, Jr. in 1957 at George AFB, CA. (479TFW, 435 TFS.) This model took just over 62 hours to build -- thanks to all the "C" modifications of the original Revell/Monogram F-100D kit and the never-ending pieces of aluminum to attach to the plastic. Fortunately, Bare Metal Foil Co. has a wide variety of aluminum sheets with an adhesive backing, so that makes the job a lot easier. But there were still (too many!) sections that required the use of kitchen foil, glued on with Micro Metal Foil adhesive. There is no way you can paint bare aluminum realistically, so you might as well use real aluminum. 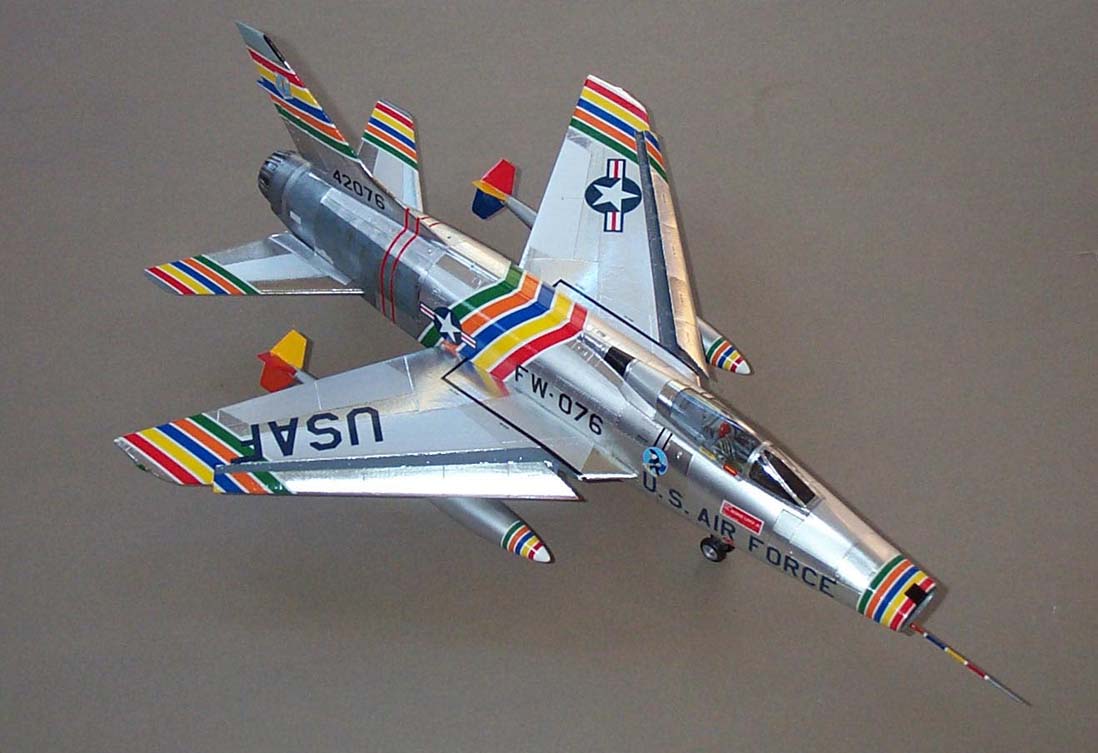 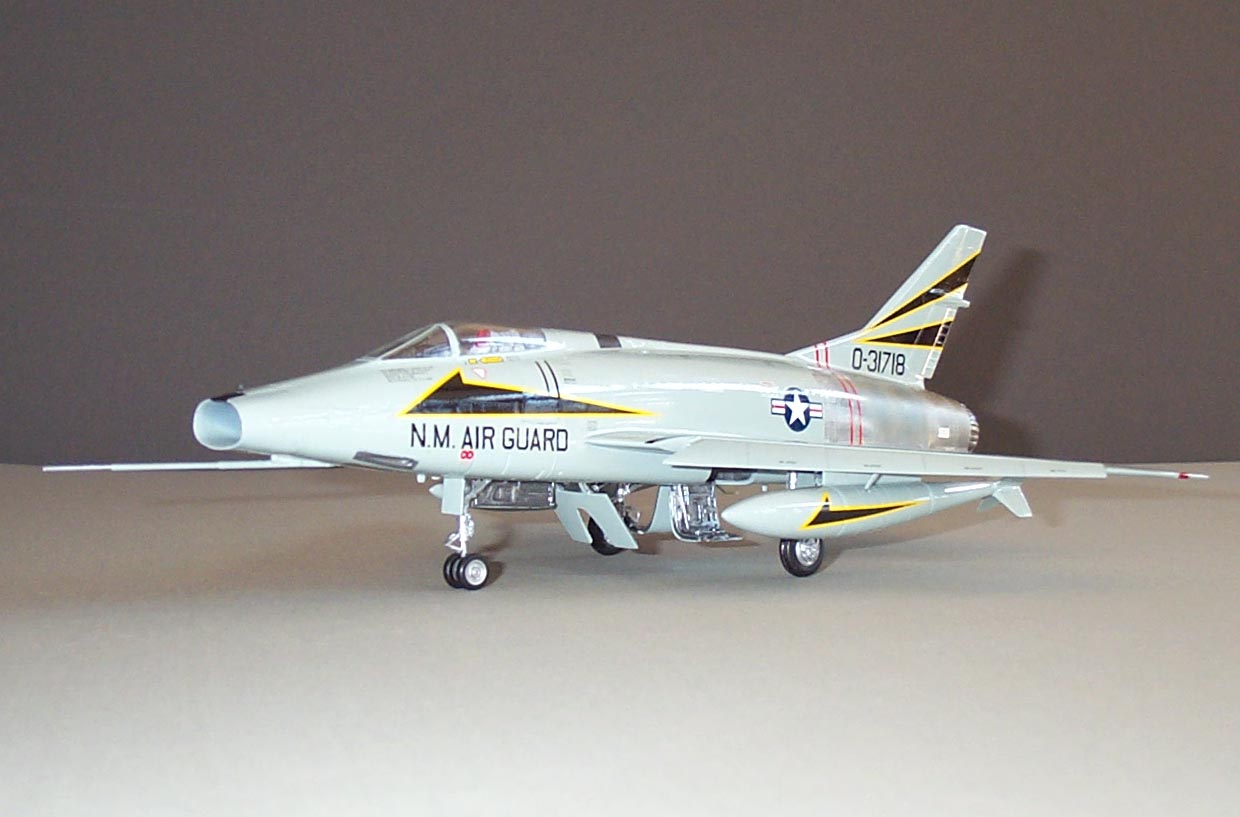